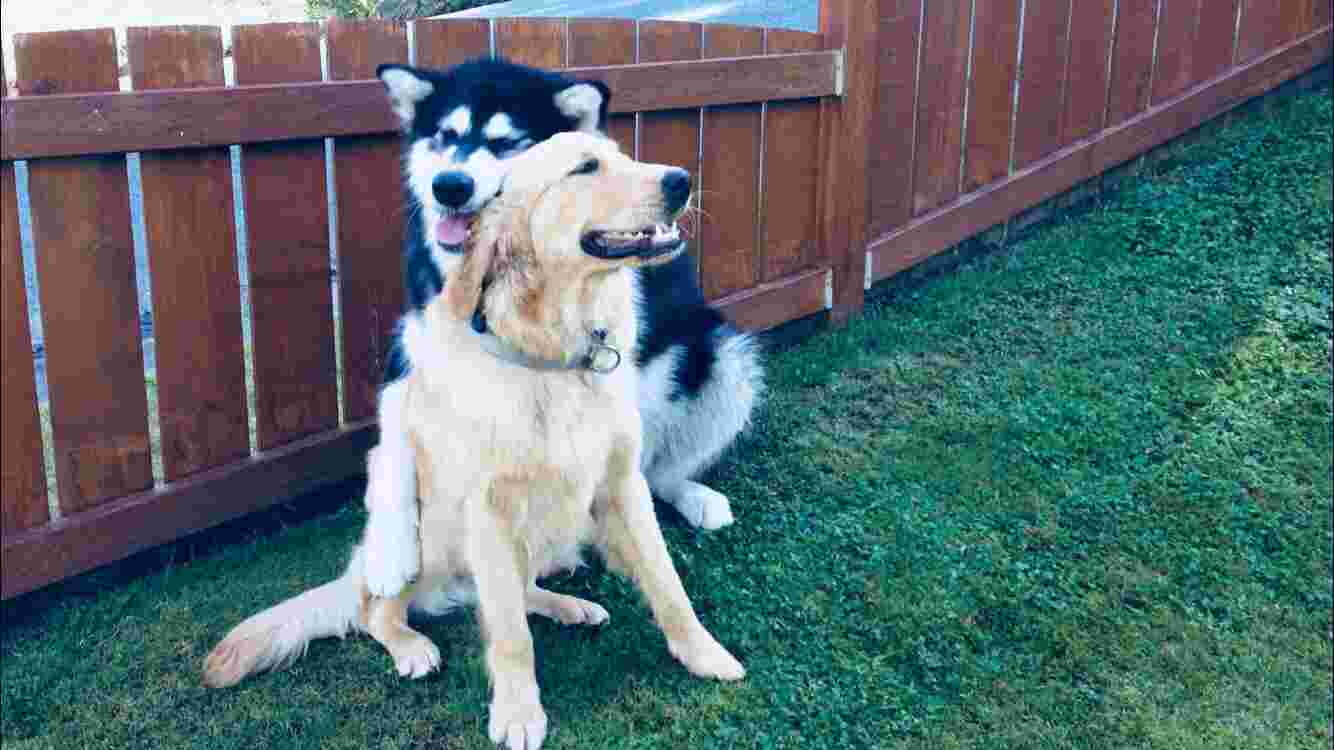 Like every dog, heat is a natural cycle in Golden Retrievers after attaining sexual maturity. Further, this cycle depicts the best time to conceive and make puppies. And if you want to breed your Golden Retriever, you should know how long can your dog stay in the heat.

Moreover, these dogs may not be receptive to male Golden Retrievers throughout the heat cycle. And they start showing mating behavior only after the Proestrus cycle. As they enter the fertile stage at the Estrus stage, it gets only 7 to 10 days to conceive.

When you bring a female Golden Retriever into your home, it instantly becomes a family member. Thus, you would want to do every possible thing for the longevity of your pet. And since the heat cycle plays a vital role in health, you need to have proper knowledge of a Golden Retriever’s heat cycle.

Therefore, I will be disclosing some information about your pal’s heat cycle further in this article. So, let us start from how the heat cycle begins?

When Does Heat Start In A Golden Retriever?

Usually, Golden Retrievers go into heat at a very early age of about six months. But since their eggs aren’t mature during the first two heat cycles, you shouldn’t breed them when they are young. So, if you want to welcome puppies of your pal, hold your thought until it reaches a year old.

Besides this, the time of the heat cycle may also vary according to the types of breeds. Hence, smaller dogs can go into heat as early as four months, while the heat cycle in larger dogs may start after they reach 18-24 months older.

Do you have a female Golden Retriever? When did its heat cycle start?

How Long Does A Golden Retriever Stay In Heat?

Mostly, a Golden Retriever can stay in heat for about 2-4 weeks. Yet, these dogs don’t show attraction to the males during the early phase of the heat cycle. Further, apart from being less receptive to male dogs, they may also do not bleed in the initial few days of heat.

Moreover, the time frame of the heat cycle depends on each individual Golden Retriever. Thus, it can be either lesser than 14 days or more than 28 days. However, you can know the completion of the cycle when your pet’s vulva resolves to its actual size and stops bleeding.

Although a Golden Retriever can conceive throughout the heat cycle, the fertile period is relatively the best time for mating. Usually, it starts after 9-10 days of heat cycle and lasts for five days. Therefore, to breed your pal, focus on mating in this period.

But how can you know that your pal is in a heat cycle?

What Are The Signs That Indicates A Golden Retriever Is In Heat?

Golden Retriever in the later stage of the heat cycle constantly looks for a mating pattern. Thus, it shows some unusual signs. Generally, these signs are:

However, these signs are common. So, don’t worry when your pal shows these symptoms.

All these signs indicate that your pal has some fatal health issues. Therefore, you should immediately consult with the Vet for early prognosis and treatment.

How often do you seek help from the Vet?

What Are The Stages Of the Heat Cycle In Golden Retriever?

Like most dogs, the heat cycle occurs twice a year in Golden Retriever. Besides this, every time your pal gets heat, it follows the same heat stages. Further, if you want to healthier lifespan for your pal, try to know about each of these stages in detail.

Besides this, you must fulfill the needs of your pal during these stages for their physical and emotional development. So, the various stages of the heat in a Golden Retriever are:

Like the names suggest, the Proestrus stage is a stage before the estrus stage and the first stage of a heat cycle. Usually, this stage lasts for about 4-20 days and shows some peculiar signs like:

Usually, the estrus stage is the fertile time for your Golden Retriever when it has a higher possibility of conceiving. After the proestrus stage, the estrus stage lasts for about 5 -14 days. And your pal starts discharging straw-colored or colorless fluid instead of blood from the 8th day of this stage.

Furthermore, your dog becomes desperate for mating and has a higher instinct to breed. Therefore, it starts signaling the males by wagging the tails and flagging.

After a fertile stage, your Golden Retriever enters into a non-fertile phase on the 24th day of the heat. Generally, this stage lasts for 60-90 days. But in contrast to the estrus stage, your pal stops releasing colorless discharge and starts to bleed in this stage.

And although Golden Retrievers still have the pheromonal scent on the stage, they are less likely to be receptive to male dogs. Instead, these dogs become aggressive and start avoiding other dogs.

The Anestrus stage is the longest and final stage of heat in Golden Retriever. Usually, these breeds start resolving the physical changes of the earlier stage and return to their normal state.

Further, this stage lasts for 60-90 days. And after this stage, a new heat cycle of your pet begins, starting from the proestrus stage.

Moreover, these stages simultaneously repeat one after another. Thus, the heat cycle never ends and continues throughout the lifespan of your Golden Retriever.

Is Heat Cycle In A Golden Retriever A Lifetime Thing?

After the estrus stage starts in your Golden Retriever, it takes about eighteen months to make the heat cycle regular. Furthermore, smaller dog breeds more frequently get heat at least 3-4 times a year. But unlike them, Retrievers get heat only twice a year.

Usually, the frequency of the heat cycle decreases with the increase in size. So, larger Golden Retrievers may only get heat once a year. Moreover,  unless you decide to spay your dog, the heat cycle occurs throughout the lifetime of your pet simultaneously.

Besides it, the breeders prescribe to spay a Golden Retriever as soon as it reaches the first heat cycle. And since spaying means removal of reproductive organs, your pal will never experience heat after spaying. In addition, spaying or neutering your pet is an effective method to prevent various health issues of your pal like cancer, constipation, hip dysplasia, eye disease, ear infections, etc.

Since the first heat cycle of your pal is vital, you should know how to distinguish it. Therefore, I have some tips for you.

How To Know A Golden Retriever Is In Heat For The First Time?

As we know, first heat is the best period for birth control. Thus, the first heat cycle is the most vulnerable period at which your pet might not be mature. Further, the signs of the first cycle are less prominent.

And the changes are so subtle that sometimes owners fail to recognize them. However, the common signs of the first heat cycle in your pet are:

What Is The Best Time For Spaying A Golden Retriever?

Generally, spaying is a surgical procedure that removes or ties the reproductive organs of your Golden Retriever. And a similar process of birth control for male dogs is neutering.

Since this process relates to the hormonal imbalance of your pal, spaying at an inappropriate time has harmful effects on your pet.

Further, according to a study, spaying Golden Retrievers at an early age makes them more susceptible to cancer and joint disorders. Along with this, early neutered males are at a higher risk of dysplasia and ligament tearing. So, time of birth control is vital for the healthy lifestyle of the pet.

Besides this, an article on the optimal age to spay/castrate dogs also states that the best period for spaying is when your pet gets its first heat cycle. So, if you want to avoid breeding your pal, get spaying done as soon as it enters its first heat.

In addition, read the article- How To Stop Your Golden Retriever From Mating, to stop breeding.

How Can You Care A Golden Retriever In Heat?

Being a needy breed, Golden Retrievers seek more attention. But when your pal is in heat, it becomes emotionally and physically vulnerable. Therefore, you need to put extra effort into your Retriever’s care to ensure their happiness.

Hence, here are some caring tips for your pal in the heat:

Do you find these tips helpful?

Besides this, the heat cycle in your pal is an indication of its sexual maturity. So, you have lesser time to decide about breeding your pet.

Although the contagious smile of the puppy Golden Retriever is irresistible, flowing with sentiments isn’t good. Thus, make your decisions carefully.

I hope this article holds all the essential information. So, you can give a qualitative lifestyle for your Golden Retriever.

Do you have any suggestions? The comment box is waiting for your thoughts.

No comments to show.
We use cookies on our website to give you the most relevant experience by remembering your preferences and repeat visits. By clicking “Accept All”, you consent to the use of ALL the cookies. However, you may visit "Cookie Settings" to provide a controlled consent.
Cookie SettingsAccept All
Manage consent

This website uses cookies to improve your experience while you navigate through the website. Out of these, the cookies that are categorized as necessary are stored on your browser as they are essential for the working of basic functionalities of the website. We also use third-party cookies that help us analyze and understand how you use this website. These cookies will be stored in your browser only with your consent. You also have the option to opt-out of these cookies. But opting out of some of these cookies may affect your browsing experience.
Necessary Always Enabled
Necessary cookies are absolutely essential for the website to function properly. These cookies ensure basic functionalities and security features of the website, anonymously.
Functional
Functional cookies help to perform certain functionalities like sharing the content of the website on social media platforms, collect feedbacks, and other third-party features.
Performance
Performance cookies are used to understand and analyze the key performance indexes of the website which helps in delivering a better user experience for the visitors.
Analytics
Analytical cookies are used to understand how visitors interact with the website. These cookies help provide information on metrics the number of visitors, bounce rate, traffic source, etc.
Advertisement
Advertisement cookies are used to provide visitors with relevant ads and marketing campaigns. These cookies track visitors across websites and collect information to provide customized ads.
Others
Other uncategorized cookies are those that are being analyzed and have not been classified into a category as yet.
SAVE & ACCEPT